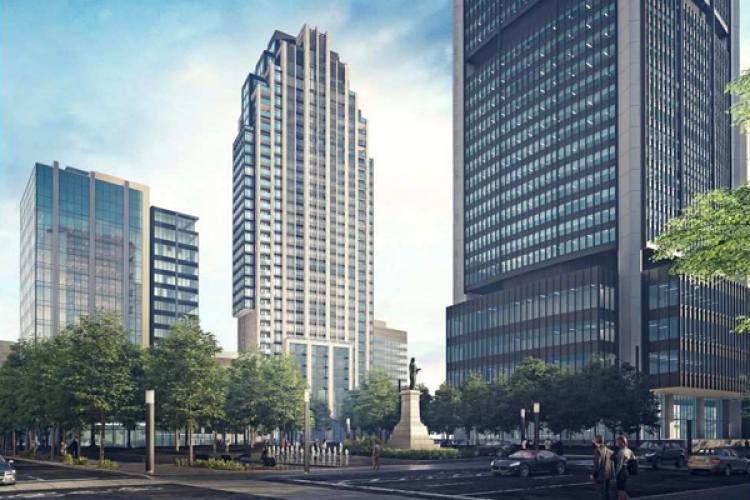 Now that it is more than 80 per cent sold, Broccolini is slated to begin construction next year on its $150-million 628 St. Jacques luxury condo project across from Victoria Square in Old Montreal.

Most of the 258 units in the 35-storey condo sold within a few weeks after the project opened to the public last month.

The building, located on the last parcel of redevelopment land available in the vicinity of Victoria Square, is scheduled to be completed in 2021.

Jean Langlois, director of communications and marketing at Broccolini, is not surprised it is selling so quickly.

Langlois says the Victoria Square location "is a premium one – you're both downtown and in Old Montreal at the same time. It's kind of unique in Montreal as far as locations go. Everything's there. It's very lively during work hours, but on the weekend it's so quiet. It really has it all."

He says the location across from the Tour de la Bourse (Stock Exchange Tower) called for something a bit more upscale so that "people who have it all can have it all."

Sales were boosted with a marketing campaign with slogans like "Being able to walk to work . . . Now that's luxury."

The tower will be art deco-inspired and will have a New York City feel, Langlois says. However, the ultimate goal is to have a new building that blends in well and looks like it could have been around for a long time, given the area's eclectic mix of old and new.

"There's been some criticism that it's not modern enough but I think it really sits well in its location. I think we managed to have the right balance."

Buyers to date have been mostly Montrealers, aged 25 to 75. "The mix is really broad, including people who work in the area, investors and lots of owner-occupants," Langlois says.

Broccolini has been assembling the land that makes up the project for years. Last May, the developer announced it had acquired the last parcel at 630 St. Jacques St.

The facade of a building that dates back to 1905 at the corner of St. Jacques and Gauvin Streets is being preserved and integrated into the building, while the former Toronto-Dominion Bank insurance building is being demolished.

Part of the land had been slated for the Victoire condo project, which was proposed several years ago, but failed to get off the ground. That project was supposed to have about 20 storeys with only two penthouse-like units on each floor.

"They offered tons of customization options, which is nice in theory but in reality very hard to do," Langlois says. "We were finally able to buy the land from one of the creditors. It wasn't simple to assemble all of those parcels to do a project that was more viable financially."

The 628 St. Jacques name for the condo "is part of that New York feel," Langlois says. "There's a lot of New York projects that have their address as the name of the project. We kind of went for that."

Broccolini, a 70-year-old family firm, has developed and built more than four million square feet of office space in the past 10 years.

Among its other projects in Montreal, Broccolini recently completed the 50-storey L'Avenue, which has become the city's tallest mixed-use building, and is building a new headquarters for Radio-Canada/CBC (see Broccolini begins building new Montreal CBC HQ).