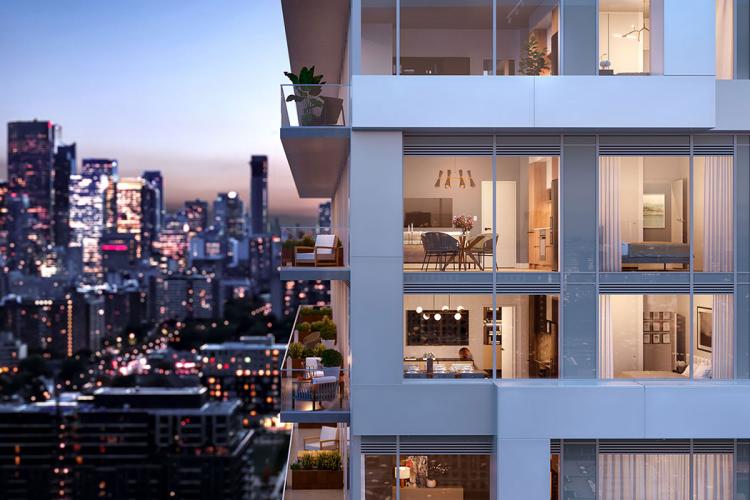 Broccolini is marking its 10th year since expanding into Toronto by opening sales for its first high-rise residential development in the city, River & Fifth, in June.

The Graziani + Corazza Architects Inc.-designed River & Fifth will be a 37-storey building with approximately 550 condominium units at 5 Defries St. Details about suite sizes and pricing haven't yet been released.

River & Fifth is just east of the downtown core and west of the Don River near the Don Valley. It offers easy access to both urban and natural environments.

"We've been actively looking within the Toronto market for development sites," said Broccolini. "It's been a tough market since there's a lot of competition with a lot of serious players that are active in that sector. We've been looking full-time for almost three years to try and find that site."

The company has also acquired another nearby property on River Street which is going through the approvals process. Broccolini hopes to launch sales for that building, which he said will have a similar height and scale but likely a different design, next year.

Broccolini is celebrating its 70th year in business in 2019. The company began when founder Donato Broccolini built a single-family home in Montreal. It grew over the years, shifting its focus to industrial and commercial construction in the late 1970s.

Donato's sons — John, Joseph and Paul — got involved in the 1980s, and the company began purchasing sites for its own development projects. Anthony is part of the third generation of Broccolinis who have helped grow the company to about 330 employees. It has expanded from its Montreal base into Ottawa in 2004 and the Greater Toronto Area (GTA) in 2009.

"Us going into Ottawa was a very natural expansion for us," said Broccolini. "It's the next closest major market to Montreal and we had some clients that we were building for here that were based in Ottawa."

The company has built almost 2.5 million square feet of office space in Ottawa for tenants including the federal government and Telus.

Broccolini began building a 1.02-million-square-foot distribution facility for Amazon in Ottawa in 2018. Earlier this year it sold a 90 per cent share of the centre to Concert Properties. The building should be completed in a few months.

Broccolini has developed The Slater, a 21-storey condo and boutique hotel in Ottawa. It has also overseen construction of Life Sciences Condos, Westboro Connection, Cathedral Hill and Richcraft Condo in the capital.

In its hometown of Montreal, Broccolini developed: L'Avenue, a 50-storey, mixed-use residential/commercial building located across from the Bell Centre; and Terra Maisons De Ville, a suburban project featuring 130 townhomes in Sainte-Anne-de-Bellevue.

* new headquarters for CBC/Radio-Canada, which has signed a 30-year lease for a 418,000-square-foot complex that will be delivered next January;

* 628 Saint-Jacques, a 35-storey, 258-unit condo with ground-floor retail in Victoria Square that's scheduled for completion in 2021;

* Victoria sur le Parc, which will include a 58-storey residential tower and 10-floor heritage podium with 330,000 square feet of office space. It's expected to be completed in 2023;

"We'll be changing the skyline of Montreal with those projects," said Broccolini.

The privately owned firm is also building a 1.2-million-square-foot IKEA distribution centre in Beauharnois, Que. It should be completed by the end of the year.

"We do about $600 million in construction sales annually," said Broccolini. "Generally half of that comes from third-party construction and the other half comes from our own real estate development projects.

"At any given time, we maybe have 10 different development projects underway in the execution phase."

Broccolini intends to focus on developing in its three current markets, believing they offer plenty of growth opportunities.

"But I want to make sure that, wherever we are and whatever we're doing, we're truly going to be the best at it. Our clients are going to want to work with us, the trades will want to work with Broccolini, and we want Broccolini to be a highly sought-after employer in the marketplace.

"You do that by delivering strong results and projects that are on time and on budget."