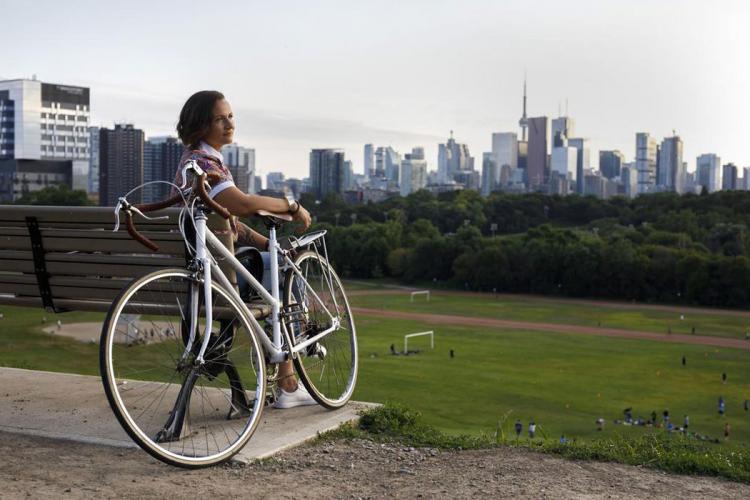 A river runs past it. A pool sits atop it. Trees and green space surround it.

The 37-storey condominium tower, planned for the west side of the Don River, just south of Dundas St. E., is poetically described by developer Broccolini as “the fusion of nature and city dancing along the river's edge."

Less lyrical but equally enthusiastic is landscape architect and arborist Michael Ormston-Holloway, who's involved in planning and designing parks in the nearby community.

“This neighbourhood is blowing it out of the water," he says, citing elements such as urban forest, tree count and soil volumes.

Situated between River St. and Bayview Ave., River & Fifth will be “in a great place" as part of an area that's undergoing a major revitalization, says Ormston-Holloway, a principal at the Planning Partnership, which specializes in urban design, planning and landscape architecture.

“I need trees. I can't be surrounded by buildings," says the design director who bikes to work in Liberty Village from her home at Queen St. E. and Broadview Ave.

She lists cyclability, the TTC's 24-hour, 501 Queen streetcar and “community-based" feeling as part of the area's appeal.

“I just love it. You get the best of everything," says Luxmore-Rousset.

The committed east-ender looked for a condo in other neighbourhoods, including Leslieville, but says she wasn't willing to pay $1,300 per square foot. With prices at River & Fifth starting at $1,000 per square foot, her suite is right within budget.

“It's good value," says the pleased purchaser. “It's exactly what I need."

The provision of co-working space in the form of a communal area where residents can hang out, do work or hold meetings, is an attractive feature, she notes. And the rooftop pool will give her sons a reason to visit, laughs the mother of two, who expects to be an empty nester by the time her new home is ready in less than four years.

“It's very big for us," chief operating officer Anthony Broccolini says of the Montreal-based family firm's first residential highrise in Toronto, where they're both developer and owner.

“We're very excited and we're honoured about the opportunity to showcase what we can do," says Broccolini. “We love the location," he says, citing “amazing, amazing views," proximity to the downtown core, and neighbouring Don River and trail through the valley.

Corktown Common, a former underutilized brownfield, provides 18 acres of park and gathering places nearby but Broccolini is working with the city to create an additional “decent-sized green space" alongside the building.

A planned pedestrian crossing will connect River & Fifth to Bayview Ave. and the surrounding community, including the grocery and retail shops, cafes and eateries of Queen St. E.

The tower and an attached 11-storey podium will be anchored by a series of two-storey townhomes. A total of 580 units, including five two-storey penthouses, will be available at prices ranging from mid-$400,000 to over $1.2 million. Pre-sales have launched for the condos, with units ranging from 341-sq.-ft. studios to 1,401-sq.-ft. three-bedroom designs.

According to Enzo Corazza, principal at Graziani + Corazza Architects, being close to the Don River Valley “sparked the idea to bring a sense of the outdoors inside the building and integrate a natural park feel" into the lobby and amenity spaces.

Close to 25,000 square feet of indoor and outdoor amenity space will include a kids' game room and lounge, fitness area with yoga studio and boxing gym, party lounge, and co-working space.

The 11th-floor amenities floor will be “pretty awesome," says Broccolini, envisioning residents and visitors recharging around the Baja pool overlooking the city.

Suites will have wide-plank laminate flooring and two-toned kitchens with modern fixtures, quartz countertops and matte-black appliances. Most units will have a balcony or terrace.

Ormston-Holloway of the Planning Partnership, commends Broccolini for River & Fifth's focus on nature, since tree-lined streets, art and parks are key features of the public spaces the urban design and consultancy firm has planned in the West Don Lands. The community comprises 80 acres of former industrial lands to the south and west that are being redeveloped as a sustainable, mixed-use, pedestrian-friendly area. The 38-km Don River, once heavily polluted and littered with trash, is a big part of the ongoing rehabilitation.

Carola Vyhnak is a Cobourg-based writer covering home and real-estate stories. She is a contributor for the Star. Reach her at cvyhnak@gmail.com

Building: 37-storey condominium with 580 suites including 11 townhomes. Condos include studios, one-bedroom, one-plus-den, two-bedroom, two-plus-den and three-bedroom, from 341-sq.-ft. to 1,401-sq.-ft. There are five two-storey penthouses.